In common with many enduro- and adventure-styled bikes, the F800GS is a tall machine. Seat height from the factory is 880mm (35 inches), significantly taller than a typical sports bike or cruiser (a ‘standard’ Sportster is just under 28 inches, a classic Enfield Bullet about the same).

On the move, it’s this very tallosity or tallishishness which gives the machine poise and presence but coming to rest can, occasionally, be tricky if for whatever reason you don’t quite get it right (as when following novice riders struggling with clutch control at a junction).

I’m six feet with a near 33-inch inside leg and I can flat-foot the bike most of the time but occasionally, say at rest on a road with adverse camber, it feels decidedly…well, not out of control exactly, but definitely a bit wobbly. I suspect in part it’s because I’m still getting accustomed to the machine but I’d be happier with a bit more reach.

BMW offers a number of suspension and other options to reduce the height but the simplest is the OE low seat. New, the low seat is a free factory option. As an accessory, it’s somewhere around 185 quid. Hmm, you can guess my feelings on that! Time for a look-see at the second-hand market…

To cut a long story short, two weeks rummaging on ebay turned up a low seat, professionally recovered in what some owners might consider an attractive black vinyl, and with a fiver starting price. I followed the auction, bid in the closing seconds and paid £80. A few days later, this arrived:

Having just returned from a walking holiday with a wet rucksack and aching limbs I was in no mood to open the parcel possibly to be met by something I’d have to wrangle with the seller about (ebay buying being what it is…).

I left the box to languish overnight and unpacked the ruckie instead. Next morning, I set to…


Freed from it’s wrapping, the seat proved to be exactly as described: in good condition. I can’t pretend I like the vinyl (think: ’80s V-Max) though the finish certainly deserves the epithet ‘professional’.

Removing an F8GS seat is simplicity itself: the ignition key turns a seat lock on the nearside and the seat lifts up and away. I transferred the toolkit to the new seat and installed it – now for a try-out. Wearing Converse, I swung astride and… yes, left foot down flat and my leg bent, a significant improvement.


Okeh, hand guards and seat sorted. Next: crash bars from Adventure-Spec – the only sensible option!
Posted by billycarr'sbobbles at 03:00 No comments:

Regular visitors to mondo will recall that I recently returned to modern two-wheeled motoring with a BMW F800GS ‘adventure’ bike – think big trailie, enduro etc – which was something of a sea change following several years astride 1950s ’cycles.

Having ridden the GS for a few weeks I can truly say it’s a great machine – probably the best contemporary bike I’ve ever owned. Wonderful handling, excellent braking, fabulous fuel economy, what’s not to like?

Well, a couple of things… Despite my being six feet with an almost 33in inside leg, the F8GS feels very tall – great when you’re in motion, tricky at rest. I can ‘flat-foot’ the bike by scooching my arse with a slight sideways shift and balls-of-the-feet is no problem so maybe it’s simply because I’ve put a lot of miles on the Enfield of late and the GS is a very different experience – like moving from a very small thing to…er, something quite a bit bigger.

Thing two, BMW deleted the ‘miles remaining’ fuel readout from the on-board computer’s software for the 2011 model, a fact which had escaped me until I scrolled through the options on my 2012 machine, pored over the manual, decided I was being stupid and asked how to invoke the feature at an online forum receiving the answer as above.

Bugger! Deleted following accusations of inaccuracy apparently. Yeah well maybe, but even a fuzzy indicator is better than no indicator especially for one who invariably forgets to reset the trip (ie, me).

But that’s it. I can’t fault the machine otherwise, it’s glorious.

There’s nothing I can do about the fuel option other than remember to use the trip, but I can gain a little more reach in the leg with the OEM low seat and I’m actively searching for a secondhand example. Other accessories: I’d like crash bars from Adventure Spec which offer spectacular protection in an off or if you drop the machine – a distinct possibility when out with novice riders cos they’re always making sudden stops and turns or else riding off somewhere they shouldn’t.

For the same reason I also wanted to get hand guards to save the levers and provide a little protection from the elements.

Time for a rummage.

First find was indeed hand guards, in this case the OEM guards from BMW, universally considered highly effective. Sold to me secondhand at just less than half the list price (yes, residuals are good – if you’re selling!). 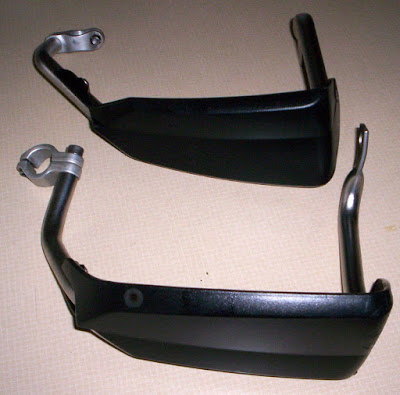 These came with the large plastic ‘protectors’ but minus the wind ‘spoiler’ and despite a few scuffs are in pretty good shape (though one of the mounting bolts was bent suggesting a bit of a bump previously). Ne’er mind, they have life in ’em yet. 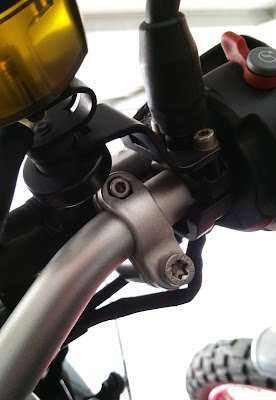 Mounting is simple: remove the bar-end weights with a T55 torx bit (T40 on earlier models), and install with the the replacement end weights slotted to take the guard and a clamp at the other end. Without instructions and with no downloads detailing the guards at BMW’s website, I didn’t have torque values so I snugged them up good and tight but without hauling on them. I’ll check the fasteners in a week or two to ensure they’re tight. 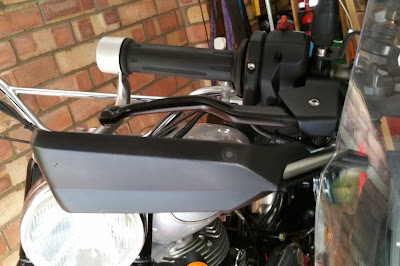 Fitted, the guards look good but I wondered whether they might be big and clumsy on the move (I loathe bar-end mirrors for example) but not a bit of it. There’s some wind protection and they’re not in the least distracting.

Wonder if I can homebrew the spoilers from stout black plastic and thereby save 14 quid?
Posted by billycarr'sbobbles at 12:34 No comments: 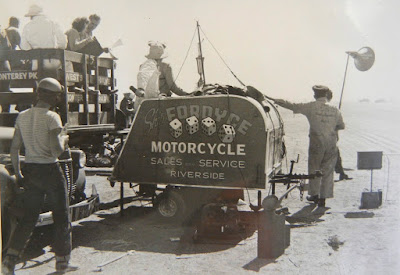 Triumph, Harley and (yes!) Honda dealer Skip Fordyce set up shop in 1941 in Riverside, California after a career in daredevil riding during the 1930s. Within a few years and following a move to larger premises at 3698 14th Street, Fordyce was popularly credited with having America’s largest motorcycle dealership. The Fordyce Riverside Harley dealership was sold in 2013.
Posted by billycarr'sbobbles at 08:20 1 comment: